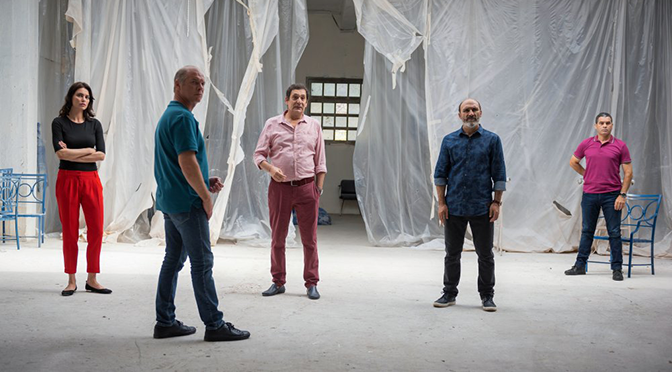 Following his breakthrough feature, 2006’s 12:08 East of Bucharest, Romanian writer-director Corneliu Porumboiu has become known for veering between similarly satirical comedies, meta-textual documentaries (The Second Game, Infinite Football) and ostensibly more traditional dramas (Police, Adjective). His most recent film, The Whistlers, which premiered in competition against Parasite at Cannes, is a departure from all of them.

With a touch of the Coen brothers in tone, The Whistlers is a comedic noir with a twist: it’s largely set around La Gomera, a Canary Island with an ancestral language, “El Silbo Gomero”, based around whistling. Cristi (Police, Adjective star Vlad Ivanov) is a cop who’s a whistle-blower for the mafia, under police surveillance himself in Romania thanks to his ties to a shady businessman. Tasked with helping to get that same mobster out of prison – and lead the way to a hidden €30m stash – Cristi ventures to La Gomera to learn the coded language, so as to secretly communicate across long distances and stifle police detection.

It’s certainly an interesting hook for a heist movie, and viewers acquainted with the Romanian New Wave can rest assured that, while certainly a more mainstream crowd pleaser, The Whistlers does not see Porumboiu drop his eccentric streak.

With the film now available on Curzon Home Cinema, alongside his previous feature Infinite Football, we speak to Porumboiu about more than if he knows how to whistle like Lauren Bacall…